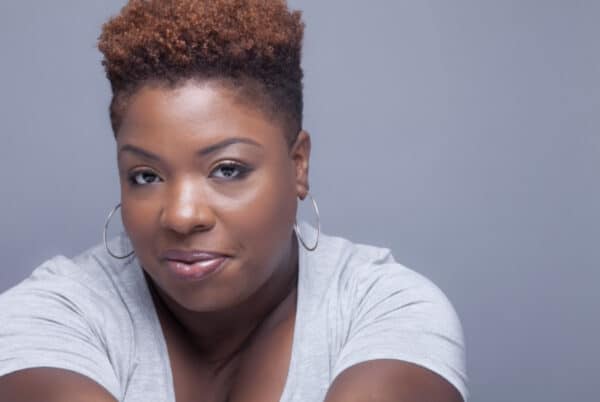 Maiesha McQueen has graced stages all over the nation most recently as “Becky” in the hit musical Waitress, and most recently appeared on True Colors’ stage at the Soutwest Arts Center as “Charlesetta”, the no-nonsense owner of the Top O’the Hill Cafe in East Texas Hot Links.

“[Maiesha McQueen] moves and delivers language in a variety of ways…Her voice is velvet and her delivery is always authentic and original.” -Kenny Leon, Tony Award-winning director

McQueen is an alum of Tri-Cities High School in East Point. There, she met her first mentor, Freddie Hendricks, who was her theater teacher at Tri-Cities and founder of The Youth Ensemble of Atlanta (YEA). The YEA empowered McQueen through storytelling and self-created work, giving her a non-traditional exposure to musicals. There, the company of young actors would create their own songs and their own scripts written about subjects that mattered to them. The first traditional, commercial musical she took part in was Godspell when she was in the ninth grade.

After her time at Tri-Cities, McQueen moved to New York where she graduated from New York University’s Tisch School of the Arts in 2002. McQueen moved back to Atlanta in 2005. She started to teach theater at the KIPP Strive Academy in 2014 and credits founding principal Ed Chang with supporting her desire to teach as well as pursue performing.

“Teaching, it wasn’t a Plan B for me. It was an integral part of my development as an artist and a professional,” McQueen shared with the AJC. While teaching, she performed True Colors’ production of Chasin’ Dem Blues, quickly becoming an audience favorite.

McQueen has traveled the globe for over a decade as co-founder, original composer and lead ensemble member of the touring company, Progress Theatre, whose work has been presented at spaces such as The Public Theater, 14th Street Playhouse, The Kennedy, and World Music Festival in Amsterdam. McQueen is also a certified teaching artist of over a decade, and provides classes, workshops, and mentorship to youth of all ages.