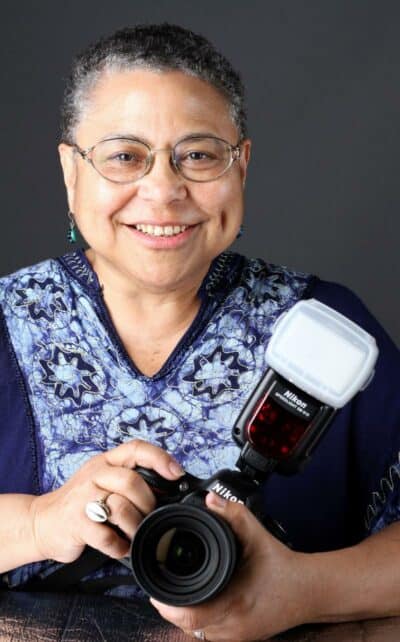 Susan J. “Sue” Ross is a “photo-griot” with a specialization in documenting images which portray the comings and goings of the African-American community – cultural, political, social and economic. In the African tradition, the griot is the oral historian holding the essence of African history and culture through the word. Sue Ross, the photo-griot, uses photographs to tell the stories of the African-American community.“I am primarily a people photographer, finding grace and dignity in the faces of our people.”

Sue Ross has combined her lifework with her positions in government administration for the City of Atlanta, serving as photographer for many Atlanta events including the annual Dream Jamborees, the 1988 Democratic Convention, the Atlanta Third World Film Festivals, the Atlanta Jazz Festivals, the Nelson Mandela visits, King Week, the National Black Arts Festivals, the Centennial Olympic Games and Paralympic Games, and as the informal, and sometimes formal, chronicler of activities during the administrations of Atlanta’s five African-American mayors. Currently, she serves as vendor development manager for the City of Atlanta Department of Watershed Management.

Her photographs have appeared in numerous books, including In the Eye of the Muses: Selections from the Clark Atlanta University Galleries; Generations, Present Tense Past Perfect: 20th Anniversary of the National Black Arts Festival; Maya Angelou: A Glorious Celebration; Savoring the Salt: the Legacy of Toni Cade Bambara; Posing Beauty, Black: A Celebration of a Culture and Reflections in Black: A History of Black Photographers: 1840 to the Present by Deborah Willis, A Love Supreme by TaRessa and Calvin Stovall, Dr. Richard A. Long’s Black Americana and African Americans, Patricia Bell Scott’s Life Notes and Double Stitch, Andrea Young’s Life Lessons My Mother Taught Me, Andrew Young’s An Easy Burden and the catalogues Dreaming Identities, 30 Years of the Atlanta Jazz Festival and Sistagraphy: A 10 Year Retrospective.

Sue’s portraits of Miles Davis and Pearl Primus are in the permanent collection of Clark Atlanta University Art Galleries. Her work toured in the national exhibit Saturday Night, Sunday Morning, curated by Deborah Willis. Her 2011 solo exhibition “Sankofa: Looking Back to Move Forward” explored the 22 year history of the National Black Arts Festival. Her work was recently featured in ‘Dreaming Identities’ at the Arnika Dawkins Gallery, curated by Dr Deborah Willis, and is currently on display in exhibits at AUC Woodruff Library, Southwest Arts Center and Stonecrest Library.

She is a 2004 recipient of the Paul R. Jones Family Fund’s first national Spiral Award to Artists of Distinction and has been honored for her cultural work by the Trumpet Awards Foundation, Spelman College Digital Moving Image Salon, Rolling Out Magazine Top 25 Women in Atlanta, Who’s Who in Black Atlanta,Welcome Magazine MECCA Award, Concerned Black Clergy, the Black Women Film Preservation Project, the Hammonds House Museum, the Center for Democratic Renewal and the Atlanta City Council. Sue is one of 5 photographers honored for their lifelong commitment to documenting African-American life and culture by the Georgia House of Representatives.

Sue is a founding member of Sistagraphy™: the collective of african-american women photographers, a member of MOCA and the Atlanta Photography Group. She serves on the boards of the Black Women Film Network, the BronzeLens Film Festival, the Hammonds House Museum, Nutrition Plus HHC and Sistagraphy. Sue also served for many years on the boards of the National Black Arts Festival, the Atlanta African Film Society and the Metropolitan Atlanta Coalition of 100 Black Women.