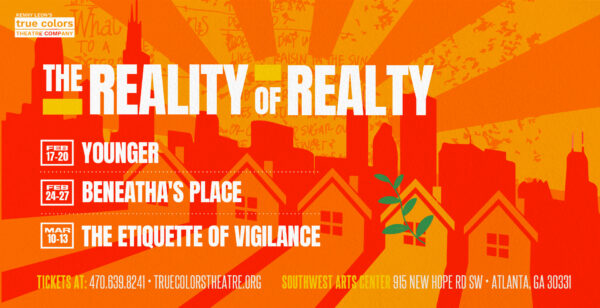 Historic Black Theatre Company Will Present Readings of
“Younger,” “Beneatha’s Place” and The Etiquette of Vigilance

ATLANTA (Feb. 7, 2022) – Kenny Leon’s True Colors Theatre Company today announced the cancellation of its scheduled performance of “Raisin” from Feb. 18 to March 13. The performance was cancelled in an abundance of caution considering the surge in cases of the COVID-19 Omicron variant.

In place of Raisin, a musical based on the play “A Raisin in the Sun” by Lorraine Hansberry, True Colors will present readings of three “Raisin”-inspired plays, “Younger” from February 18 to 20, “Beneatha’s Place” from February 25 to 27 and “The Etiquette of Vigilance” from March 11 to 13.

“Our first priority is always the safety and well-being of our actors, staff, and patrons,” said True Colors Artistic Director Jamil Jude. “Under our COVID-19 protocols, we believe these three-scaled-down productions can be held safely while still bringing the audience powerful Black stories about the effects of housing discrimination in the 1950s.”

Collectively titled the “Reality of Realty” and to be held in the City of South Fulton’s Southwest Arts Center, the three readings are much smaller in scope than the musical, with fewer actors and no singing.

“Younger,” written by Atlanta playwright Kelundra Smith, is a prelude to “A Raisin in the Sun” chronicling the journey of Lena Younger, the family matriarch, from Jackson, Miss., to Chicago during the Great Migration of Blacks moving from the South to North. “Beneatha’s Place” by Kwame Kwei-Armah follows the life of “A Raisin in the Sun” character Beneatha Younger from 1959 to the present.  “The Etiquette of Vigilance” by Robert O’Hara is a contemporary look at the Younger family 50 years after the time of the original play.

These readings are part of The Drinking Gourd Initiative, True Colors’ new program dedicated to increasing the number of new plays by Black writers that are produced by Black theaters.

“Over the last 20 years, a lot of the new work written by Black writers have been produced by predominantly white-led theaters,” said Jude. “The promise of The Drinking Gourd is that it reconnects the playwright to Black theaters who want to produce the world premieres of these amazing writers.”

True Colors is making the readings accessible to the public, with a ticket price of $25 for each performance. Patrons can also buy a ticket bundle which includes all 3 readings for $35. Tickets for the Reality of Realty are currently on sale at www.truecolorstheatre.org. Click here for immediate access to tickets.

True Colors Theatre Company is a nonprofit regional theater company based in Atlanta, GA. True Colors Theatre Company’s mission is to celebrate the rich traditions of Black storytelling while giving voice to bold artists from all cultures. The Company adds dimension and relevance to its work on the stage through active community events and 3rd – 12th grade education programming. The vision of Artistic Director Jamil Jude is for the company to “thrive at the intersection of artistic excellence and civic engagement.”