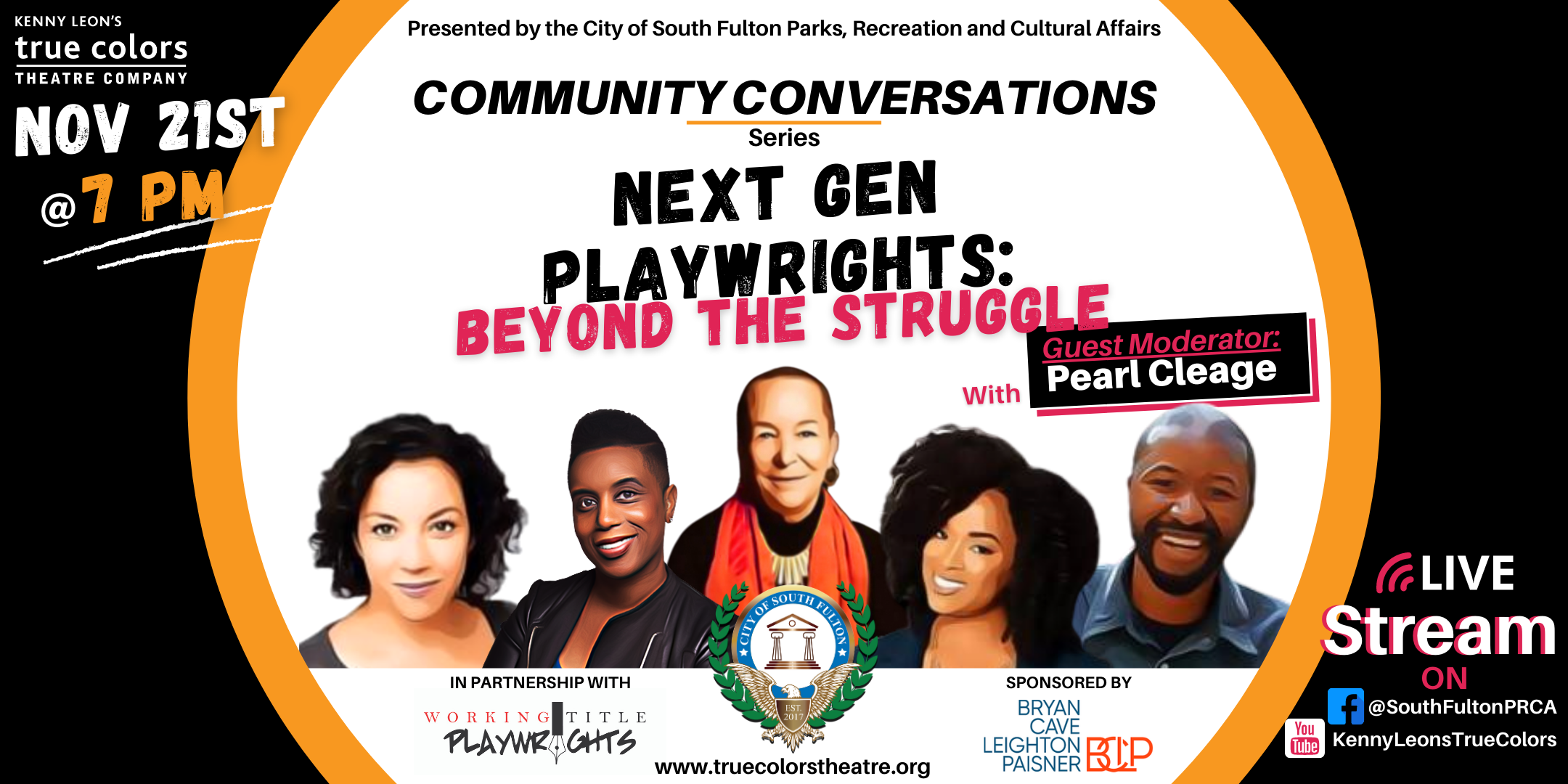 Next Gen Playwrights: Beyond the Struggle

Kenny Leon’s True Colors Theatre Company, in partnership with Working Title Playwrights, brings to you Next Gen Playwrights: Beyond the Struggle, a timely Community Conversation on the narratives being shaped by emerging BIPOC (Black, Indigenous, People of Color) playwrights in the Atlanta community. Presented by the City of South Fulton Parks, Recreation and Cultural Affairs, this conversation will be moderated by award-winning author and playwright, Pearl Cleage (Blues for an Alabama Sky, Flyin’ West).

WATCH REPLAY ON YOUTUBE
After watching, be sure to complete our brief survey!

In addition to the TCTC YouTube channel, the event will be viewable via the City of South Fulton’s Department of Parks, Recreation and Cultural Affairs’ Facebook at @SouthFultonPRCA. 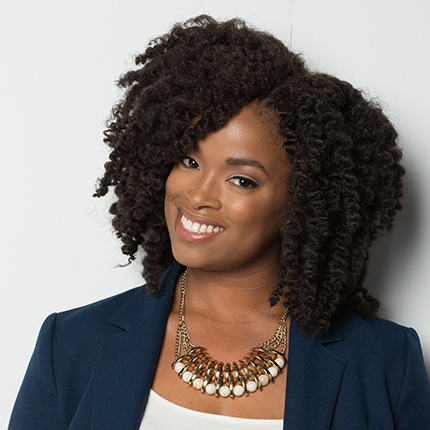 Clarissa Crawford is a creative producer whose practice is shaped by the intersections of art, community, and activism. She uses her experience in project management, storytelling, and cultural organizing to curate experiences that help inform, empower, and distribute resources to artists and communities of color across the South.

She has previously worked and consulted for one of Hollywood’s top talent and literary management agencies, produced bi-coastal artist showcases between Los Angeles and New York, and executed live and digital experiences for media and entertainment entities such as Sony Pictures Entertainment, Walt Disney Studios, NBC Entertainment, and BET.

Clarissa holds a Masters in Creative Producing and Theater Management from the California Institute of the Arts (CalArts), and accreditation as an Independent Producer from UCLA. 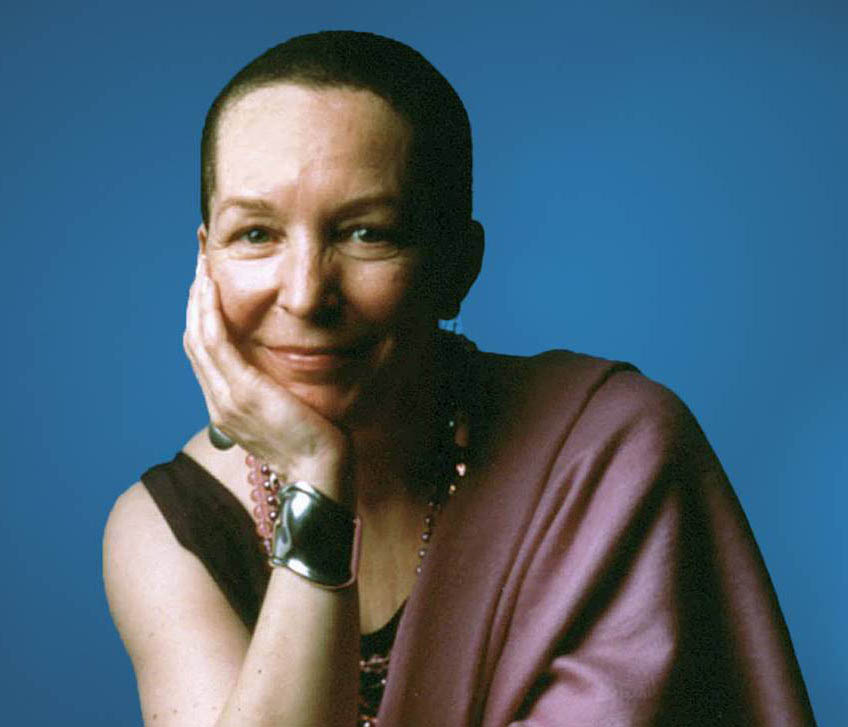 Pearl Cleage is an Atlanta based writer, currently Distinguished Artist in Residence at the Tony Award winning Alliance Theatre. Her new play Angry, Raucous, and Shamelessly Gorgeous, had its world premiere as a part of the theatre’s 50th anniversary season in 2019 and is scheduled for productions around the country when the theatres reopen next year. Her other plays premiered at the Alliance include Pointing at the Moon, What I Learned in Paris, Blues for an Alabama Sky, and Flyin’ West, the most produced new play in the country in 1994. Her play The Nacirema Society Requests the Honor of Your Presence at a Celebration of Their First One Hundred Years was commissioned by the Alabama Shakespeare Festival and co-produced with the Alliance in Montgomery and Atlanta in 2010. Her first play for young audiences, Tell Me My Dream, was commissioned and produced by the Alliance in 2015. Her book for children, co-authored with her husband, writer Zaron W. Burnett with illustrations by Radcliffe Bailey was a part of the Mayor’s Reading Club in 2018 and distributed free to 15,000 Atlanta children. It was presented at the Alliance as a play for the very young in March, 2020 and is currently streaming through the Alliance website. Cleage recently completed work on Sit-In, an animated film for young audiences about the sit-in movement in conjunction with Picture the Dream, a national exhibition sponsored by Scholastic Books, currently on view at the High Museum. Blues for An Alabama Sky was included in the 1996 Olympic Arts Festival and has been produced in multiple American theatres every year since it premiered at the Alliance in 1995. The Alliance included a 20th anniversary production in their 2015 season, directed by Susan V. Booth. The play ran off Broadway at the Keen Company in New York in 2020 and is scheduled for a production at the National Theatre in London in 2021. Some of her other plays include Late Bus to Mecca, Bourbon at the Border and A Song for Coretta. She recently completed her first Radio play, Digging in the Dark, for the Keen Company’s 2021 season.

Her first of 8 novels, What Looks Like Crazy On An Ordinary Day, was an Oprah Book Club pick and spent nine weeks on the New York Times bestseller list. Her other novels include Baby Brother’s Blues, which received an NAACP Image Award for Literature, I Wish I Had A Red Dress, Babylon Sisters, and Things I Never Thought I’d Do.  Her memoir, Things I Should Have Told My Daughter: Lies, Lessons and Love Affairs, was published by Simon and Schuster/ATRIA Books in April, 2014. She is also the co-author with her husband, writer Zaron W. Burnett, Jr., of We Speak Your Names, a praise poem commissioned by Oprah Winfrey for her 2005 Legends Weekend, and A 21st Century Freedom Song: For Selma at 50, commissioned by Winfrey for the 50th anniversary of the 1965 Selma to Montgomery March. Cleage and Burnett are frequent collaborators including their award-winning ten-year performance series, “Live at Club Zebra!” featuring their work as writers and performance artists. Cleage was awarded the Governor’s Award for the Arts in 2018. She received an Honorary Doctorate in Fine Arts from her alma mater, Spelman College, in 2010 and spent two years as a member of the Spelman faculty. She was the founding editor of CATALYST Magazine, an Atlanta-based literary journal, for ten years and served as Artistic Director of Just Us Theater Company for five years. Her work has been given grant support through the National Endowment for the Arts, the Fulton County Arts Council, the Georgia Council for the Arts, the City of Atlanta Bureau of Cultural Affairs, and the Coca-Cola Foundation. 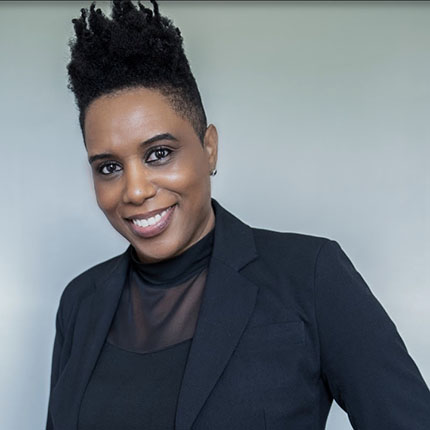 Dana L. Stringer is a commissioned playwright, poet, screenwriter, and writing instructor with a Masters of Fine Arts in Creative Writing from Antioch University Los Angeles. She currently serves as an adjunct instructor in the inspiration2publication program for the Continuing Education Program at Antioch University Online. Her course offerings and workshops have included: Transforming Poetry into Theatre: Adapting Poems for the Stage, Writing a Producible One-Act, Mask Appeal: Creating Compelling Persona Poems, and Turning Thoughts, Memories, and Life Experiences into Poetry. Dana is the author of the poetry chapbook, In Between Faith. Her poetry has also appeared in the African American Review, Rogue Agent, and Blackberry: a magazine. She is a member of the Dramatist Guild and Working Title Playwrights. Her most recent play, We the Village, was selected for Theatrical Outfit’s Made in Atlanta new play development program and the Unexpected Play Festival (2020), as well as Working Title Playwright’s First Light Series (2018). Some of her latest short works have been virtually presented by Alabama Shakespeare Festival, The Billie Holiday Theatre, Out of Hand Theater, and Black Theatre Network. A combination of her produced plays, staged readings, and interdisciplinary art have been presented by Theatrical Outfit, Vanguard Repertory Company, Ain’t I a Woman Playfest, Blue Pearl Theatrics, National Black Theatre Festival, Fade to Black Play Festival, MoJo Fest, Coleman & Smith Artistic Company, and NAACP 10-Minute Play Festival. Dana is a native of Louisville, Kentucky currently residing in Atlanta, Georgia. 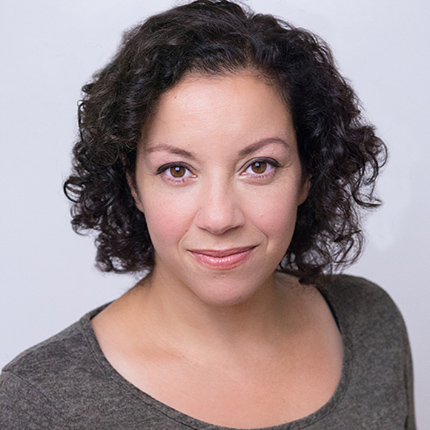 Suehyla El-Attar is an award-winning actor and playwright based in Atlanta, GA, with an acting career spanning over 20 years and a 15-year writing career.

She’s worked in multiple theatres across the Atlanta area in various capacities, including but not limited to:  The Alliance Theatre, Horizon Theatre, Synchronicity Theatre, Essential Theatre Company, Dad’s Garage, and 7 Stages. Suehyla is a first-generation-born-in-America, Egyptian Muslim who was raised in Mississippi — most of her fodder for writing is an unfair advantage. She’s continues writing, is a teaching theatre artist, an up and coming stage director, and a SAG-AFTRA actor in film/tv. She lives happily with her guy and their two cats in Decatur. 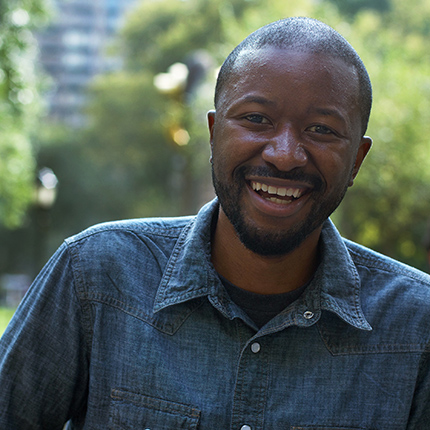 Paris Crayton III is an award-winning playwright, actor, and director. He has written over 50 plays, 21 of which have been produced around the country. He was one of ArtsATL’s “30 under 30” and one of the Atlanta Journal Constitution “Artist to Watch.” Creative Loafing named him 2014’s “Best Local Playwright.” Critics have called him “a powerful dramatist” and praised him as “One of the most important playwrights of our time.” His plays have been presented and/or workshopped by The Lark, Classical Theatre of Harlem, Aurora Theatre, Clark University, Working Title Playwrights, Stage Door Players, Rising Sage Theatre, 3 Hill Productions, Atlanta Black Theatre Festival, Beth Marshall Presents, Indianapolis Fringe Festival and more.

Use this button to RSVP! Although an RSVP is not completely necessary since we have decided to stream the event through Facebook and YouTube, we realize that some of our patrons may prefer it.