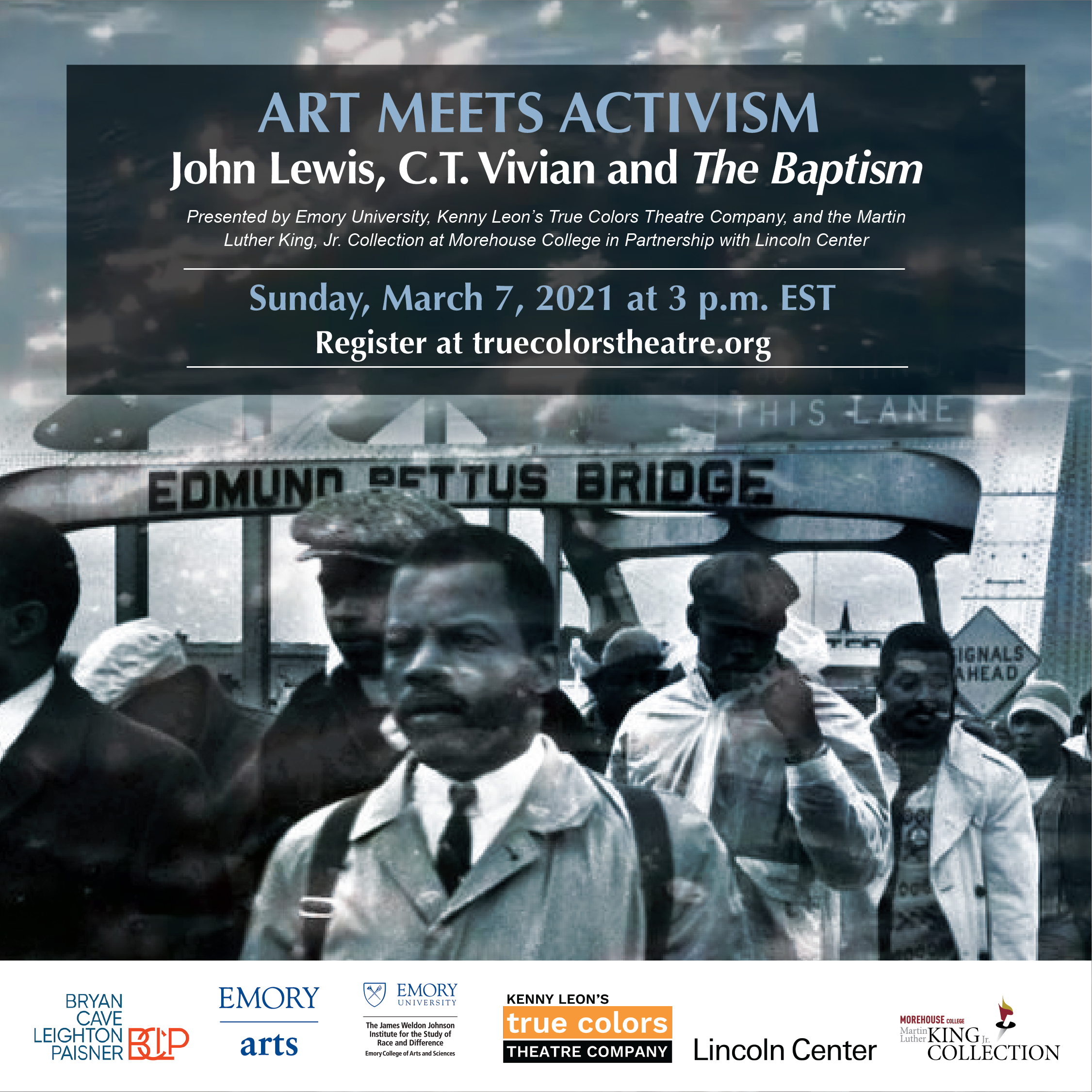 Join us for Art Meets Activism: John Lewis, C.T. Vivian, and The Baptism, a special event commemorating the 56th anniversary of the Civil Rights Movement’s Bloody Sunday and the critical role of youth and art in the movement. Presented by Emory University, Kenny Leon’s True Colors Theatre Company, and the Martin Luther King, Jr. Collection at Morehouse College in partnership with Lincoln Center, this event will feature a film screening of The Baptism, a visual poem by Carl Hancock Rux and Carrie Mae Weems, with a panel conversation of distinguished scholars, activists and artists, followed by a Q and A.

The Baptism visual poem and interview with Carl Hancock Rux conducted by Carrie Mae Weems were commissioned by and are presented courtesy of Lincoln Center for the Performing Arts. 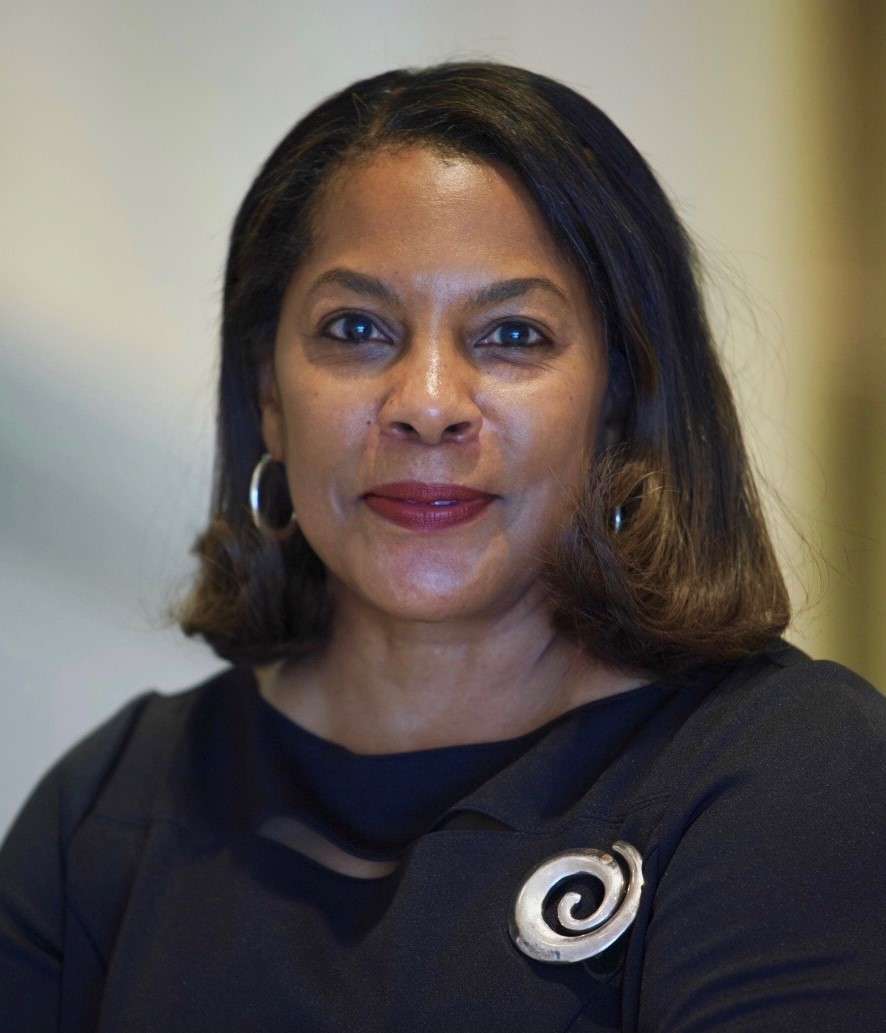 Dr. Vicki Crawford is Endowed Chair of Civil and Human Rights and Executive Director of the Office of the Morehouse College Martin Luther King, Jr. Collection. In this position, she develops campus-based programming and community outreach initiatives that advance the teachings and nonviolent philosophy of Dr. Martin Luther King, Jr. In addition, she serves on the curatorial committee at the National Center for Civil and Human Rights which has oversight for rotating thematic exhibits of the King papers. 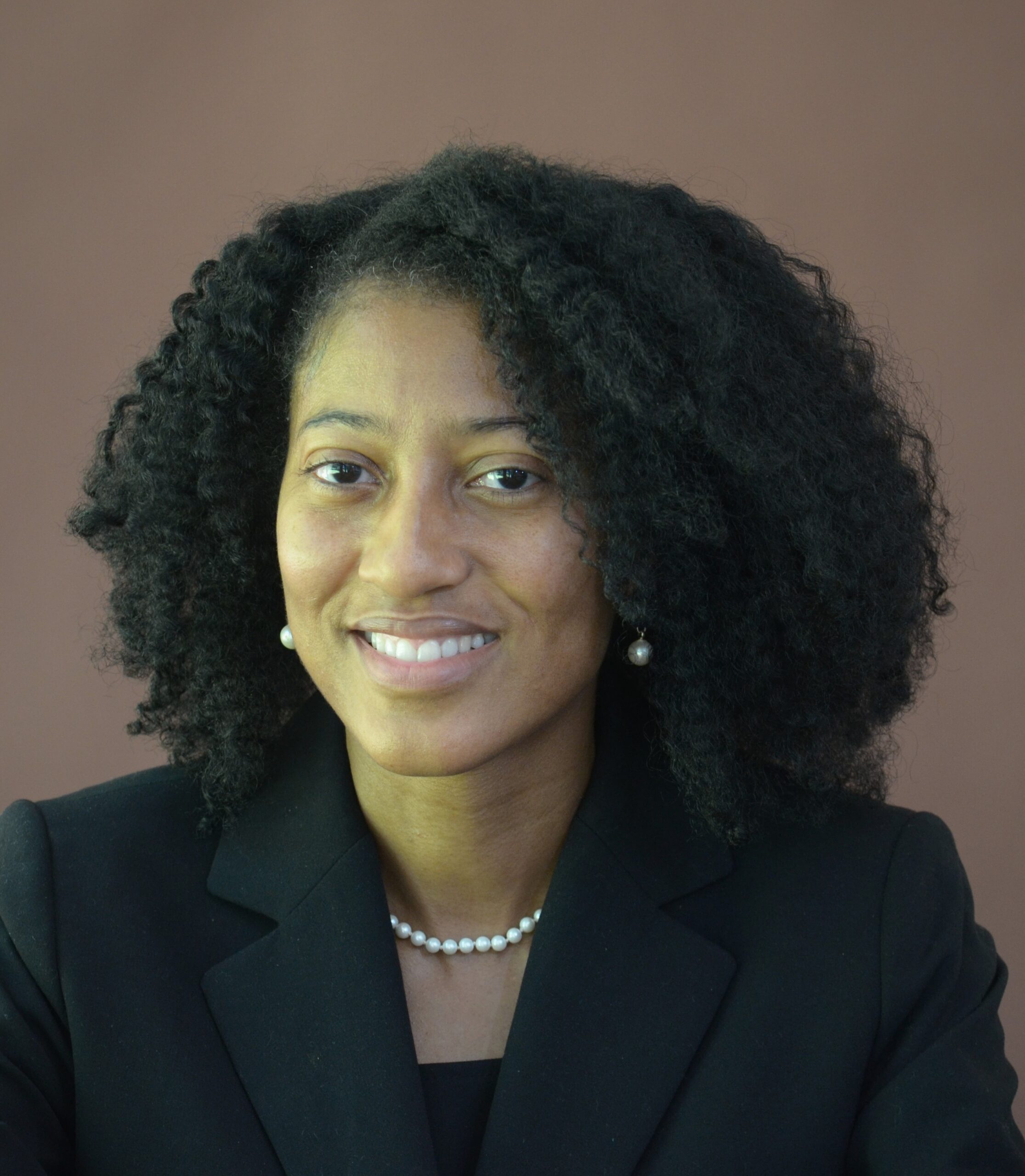 Dr. Francine L. Allen-Adams is a fellow with the James Weldon Johnson Institute at Emory University where she is working on two manuscript projects and teaching a course entitled Faith, White Abolitionists, and the Black Church: The Literary Artist during Reconstruction. She is also an Associate Professor of English at Morehouse College. As an African Americanist and literary scholar, she explores generally the intersection between theology and literature. In her current research, she has been examining the semiological import of the Black Church in literature written during Reconstruction. The latest essay written by Dr. Adams is entitled “Let Them be Black and Beautiful: A Black Southerner’s Grasp at Self-Respect in C. Eric Lincoln’s The Avenue, Clayton City.” It was published in the 2019 print issue of the North Carolina Literary Review and explores faith and race in the only novel written by C. Eric Lincoln, a former Duke University Professor of Religion and Culture and a former professor at Clark Atlanta University. 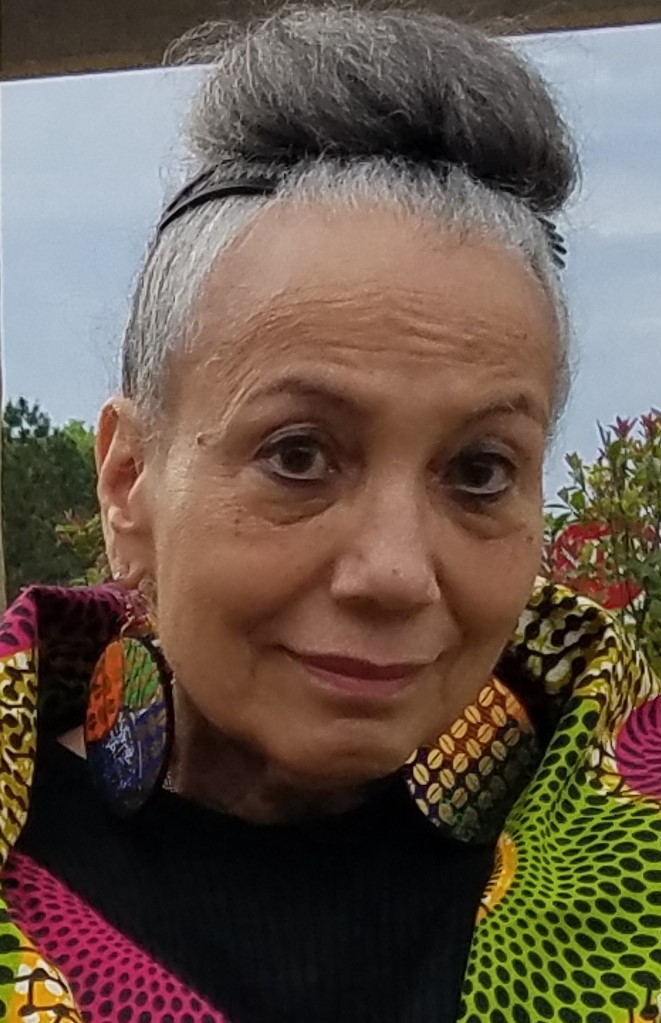 Dr. Doris Derby is an administrator, professor, documentary photographer, speaker, and author who earned her Bachelor of Arts from Hunter College in New York, and Doctor of Philosophy from the University of Illinois, Champaign/Urbana. She was a Freedom rider and one of the New York SNCC (Student Non -violent Coordinating Committee) organizers of the March on Washington in 1963. She worked in Albany, Georgia, where among other things, she single-handedly integrated St. Pauls’ Episcopal Church, the summer of 1962.

After teaching elementary school in Yonkers, New York, Dr. Derby joined the Civil Rights movement in Mississippi and Alabama, for nine years, to work with grassroots organizers in black communities and take steps to impact societal change. While there she was a pioneer in pre-school and adult literacy initiatives, in developing cooperatives for economic development, in founding the Free Southern Theater, and in being a member of Southern Media, Inc. a documentary and photography and filmmaking group. She also worked at the Margaret Walker Center, of Jackson State University, and Tougaloo College, both HBCUs.

As a ten-year civil rights movement veteran (1962–1972), her work has been recognized in several publications, documentaries, and online publications. Dr. Derby is a contributor to “Hands on the Freedom Plow,” a book that contains fifty SNCC women’s contributions to the civil rights movement. Her new book is entitled, POETAGRAPHY: Artistic Reflections of a Mississippi Lifeline in Words and Images: 1963-1972. It contains a combination of the poetry and documentary photographs she created while working in Mississippi. Her second book, PATCHWORK: (PPP) Paintings, Poetry and Prose; Art and Activism in the Civil Rights Movement, 1960 – 1972, is forthcoming Spring 2021.

From 1990 until her retirement in 2012, Dr. Derby was Georgia State University’s founding Director of African American Student Services and Programs and an Adjunct Associate Professor in the Anthropology Department. While there her initiatives impacted the lives of thousands of students here and abroad. In 2011, Dr. Derby was honored with the Georgia Humanities Award by the Governor of Georgia for her work and for her photographs depicting the life of struggling Americans who defied the post-emancipation status quo brought about by political, economic, social, and cultural domination and exploitation.

Dr. Derby’s images have been shown in numerous museums, galleries, universities, and websites including the Mississippi Civil Rights Museum, the Krannert Art Museum in Illinois, the National Museum of African American History and Culture in Washington, DC, the Rose Library of Emory University, in Atlanta, the Art Gallery of Jackson State University, the City Museum in Montpellier, France, the Turner Contemporary Art Museum in Margate, England, the Photographers Gallery and the Website of Appollo Magazine, in London, England. Dr. Derby resides in Atlanta with her husband, retired Army Veteran, and actor, Bob Banks. They are both active in their community.

Dr. Andra Gillespie is Associate Professor of Political Science and Director of the James Weldon Johnson Institute for the Study of Race and Difference at Emory University. She earned her Ph.D. in Political Science from Yale University. Gillespie teaches courses on American politics, race and politics and qualitative methodology. Her research focuses on the political leadership of the post-civil rights generation. In particular, she studies African American politicians who attempt to transcend race and how Black voters respond to them. She is the author of The New Black Politician: Cory Booker, Newark and Post-Racial America (2012) and Race and Obama Administration: Symbols, Substance and Hope (2019). She is also the editor of Whose Black Politics? Cases in Post-Racial Black Leadership (2010). In addition, she is an active public scholar whose interviews and op-eds have appeared in numerous local, national and/or international media outlets. 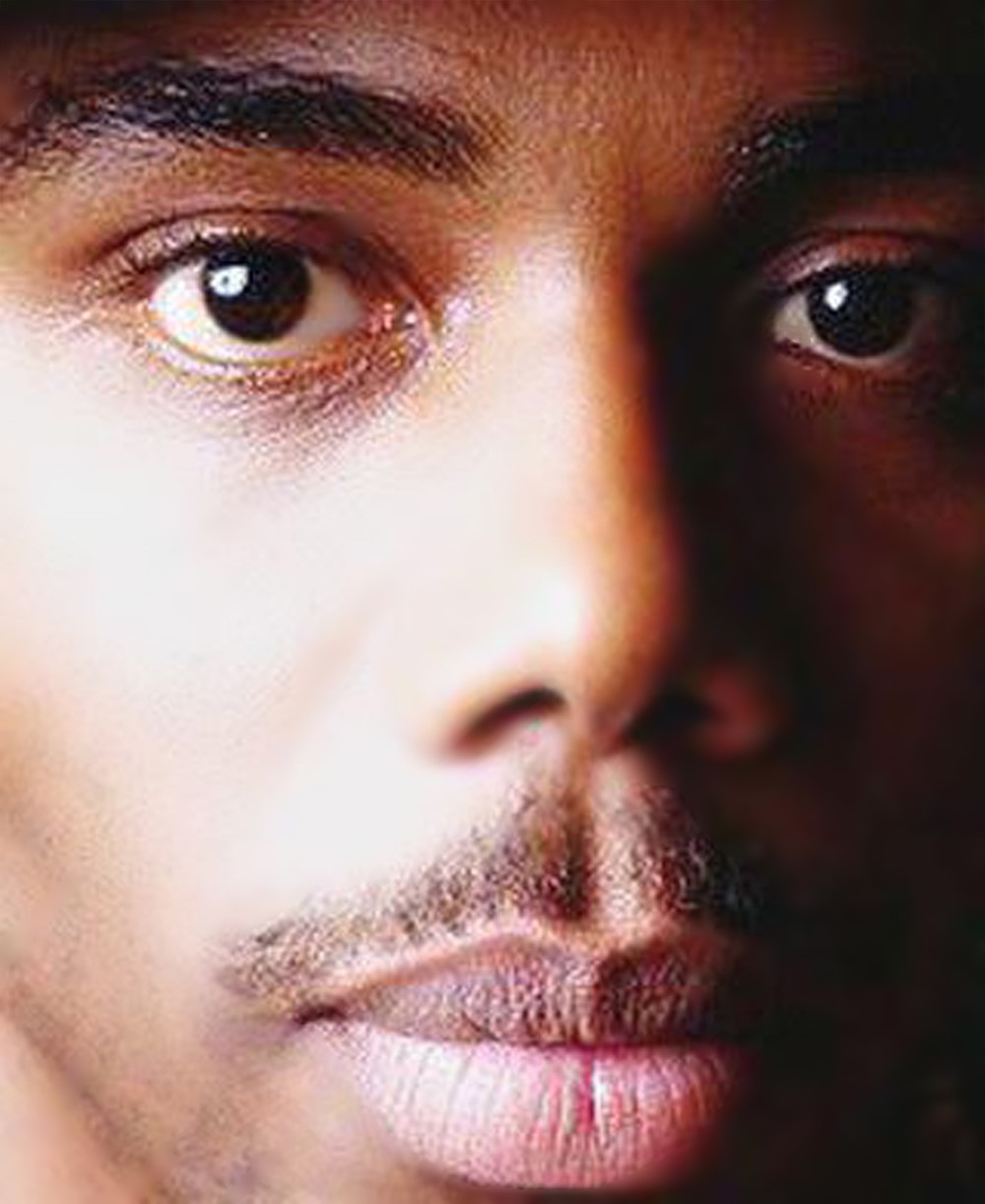 Carl Hancock Rux is an American poet, playwright, novelist, essayist, actor, director, singer/ songwriter. He is the author of several books including the Village Voice Literary Prize-winning “Pagan Operetta,” the novel, Asphalt, and the Obie Award-winning play, Talk. Rux is also a singer/songwriter with four CDs to his credit, as well as a frequent collaborator in the fields of dance, theater, film, and contemporary art . Notable collaborators include Nona Hendryx, Toshi Reagon, Bill T. Jones, Ronald K. Brown, Nick Cave, Anne Bogart, Robert Wilson, Kenny Leon, Ruben Santiago-Hudson, Jonathan Demme, Stanley Nelson Jr., Carrie Mae Weems, Glenn Ligon and others. He is the recipient of numerous awards including the Doris Duke Award for New Works, the Doris Duke Charitable Fund, the New York Foundation for the Arts (NYFA) Prize, the Bessie Award and the Alpert Award in the Arts, and a 2019 Global Change Maker award by WeMakeChange.Org. His archives are housed at the Billy Rose Theater Division of the New York Public Library, the Archives of American Art, Smithsonian Institution as well as the Film and Video/Theater and Dance Library of the California Institute of the Arts. Mr. Rux is a co-Artistic Director of Mabou Mines.